Return of the pre-let in South Yorkshire?

2011 take-up of industrial property across South Yorkshire has been dominated by the highest levels of pre-let activity since 2004, according to our latest research.

At the start of the 90s, South Yorkshire’s industrial property development cycle was in full swing and pre-let activity was almost non-existent. However, in 2003, take-up rose sharply and pre-let activity increased – accounting for around half of total take-up. This was replicated again in 2004, when the proportion of pre-let space rose to almost 75%.

In stark contrast, there was no pre-let activity between 2005 and 2008, and its contribution has been subdued ever since, accounting for less than 10% in 2010.

Ed Norris, Industrial and Logistics agent in our Sheffield office, said: The lack of development finance, combined with increasing occupier sentiment, has halved the region’s supply of good quality, well-located industrial stock. As a result, pre-lets have increased significantly.

“These factors have contributed to a significant change in South Yorkshire’s pre-let market. In the three quarters to September 2011, the amount of pre-let industrial space stood at 213,500 sq ft, accounting for 43% of South Yorkshire total ‘big shed’ take-up for the year.”

Ed concluded: “We predict that South Yorkshire has approximately three years’ supply of big sheds remaining. The demand for pre-lets will no doubt increase as larger occupiers, who are frequently drawn to the region, continue to look to re-locate or expand.” 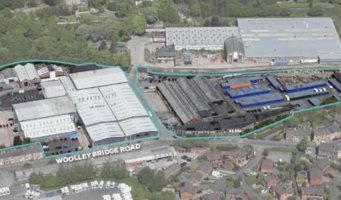