The commercial property market in Northern Ireland finished 2017 in a strong and resilient position with a total investment volume figure of £340.9m, 24 per cent above 2016 and just above the five-year average, according to our latest research.

The Investment Transactions Northern Ireland Bulletin Q4 2017 showed the retail sector dominated once again in 2017, following a consistent trend since 2010.

Transactions were boosted significantly by Wirefox’s £123m purchase of CastleCourt Shopping Centre (NIY 6.27%) in July 2017. Investment volume in the last quarter reached £88.6m, a robust performance compared to the other post-referendum quarters.

The office sector is traditionally second place in terms of investment volume, but at £35.8m the alternative sector surpassed it in 2017. In recent years, an increase in demand for specialist long-leased assets has occurred, with gyms, hotels and student accommodation transacting more frequently.

Neil McShane, director in the capital markets division at Lambert Smith Hampton, said: “The 2017 figures overall demonstrate the continued attractiveness of the Northern Irish investment market to a variety of investors. However, they also reveal the mixed picture between sectors. The retail sector was considerably boosted by one deal and the office performance was consistent with 2016. On the other hand, the industrial and alternative sectors are growing steadily.”

Mr McShane added: “The investment market has been affected by the significant political and economic challenges of 2017, the Brexit negotiations, the impasse at Stormont and, to a lesser extent, the first interest rate rise in over a decade. Consequently, there is a considerable lack of supply, with the number of properties brought to market annually on the decline. While transactions have picked up since early 2017, caution and a flight to quality continue to remain at the forefront of investor sentiment.

“With the first stage of the Brexit negotiations complete, reassurances about the impact on the Irish border and the acclimatisation to the lack of Stormont Executive, we expect that investment activity in 2018 will be more consistent and less turbulent than early 2017.” 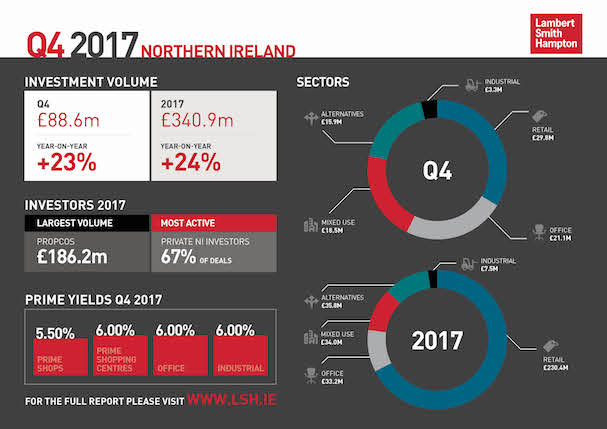