The Northern Ireland commercial property investment market is showing signs of bouncing back in the second half of 2017 after hitting five year lows in the first six months of the year.

Lambert Smith Hampton’s latest Investment Transactions Northern Ireland Bulletin reveals that at £25.9m, investment volumes in the six month period was 78 per cent below the five year first half average.

However, a number of large deals narrowly missed the deadline for inclusion in the first half figures, indicating that investment activity will be much stronger in the second half of 2017.

Donall McCann, head of regional capital markets at Lambert Smith Hampton, said: “The first half figure is low but it creates a somewhat distorted impression of market activity. With almost £260m of deals currently under offer and due to complete in the second part of the year – including the recently completed purchase of CastleCourt Shopping Centre – we are starting to see some core sectors re-gaining momentum.”

He added: “There can be no doubt that, in the wake of the Brexit vote, commercial property investment in NI, like many other parts of the UK, has faced a period of uncertainty.  Investors want to know about the long term and not just the short term and whilst NI’s overall position post-Brexit today remains unclear, a level of uncertainty will remain.  However, as our report finds, there are strong signs of market resilience at play.  A scan of the Belfast skyline today should provide comfort to anyone that NI is doing business.”

Total investment volume in 2017 is expected to surpass the annual average and exceed 2016’s £263m. LSH has forecast that total volume will exceed £300m, with transactional activity heavily weighted in the second half of the year.

Neil McShane, director at Lambert Smith Hampton, said “The key challenge for the second half of 2017 remains the mismatch between investor demand, which remains healthy, and the scarcity of good quality assets coming to the market. While there is a significant pick-up forthcoming in activity, there is a requirement for supply of quality stock to relieve investor frustrations.”

“Market changes and increased risk has prompted a change in investor behaviour. A flight to quality, increased caution and enhanced consideration across the sectors has been observed. Investors have not retreated from the commercial property market, but are being more considered about where they choose to invest and are more focussed on the merits of the opportunity in question.” 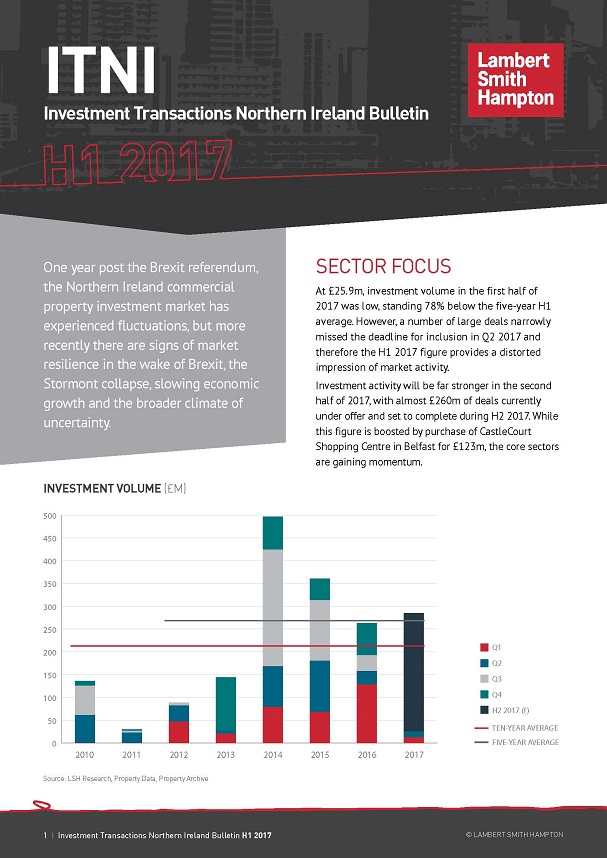