A businessman is set to breathe new life into a former RAF base in North Yorkshire after acquiring it for an undisclosed sum.

Successful fruit farmer and aviation enthusiast Chris Makins has bought the 448-acre RAF Church Fenton airfield near Tadcaster where he hopes to create up to 100 jobs over the next five years.

He said: “This is a very well known site in the region and given the scale of the opportunity we received a significant amount of interest and a number of bids from a range of interested parties. However, following the Formal Tender the bid from Makins was successful.”

Airfield to be returned to former glory

The former World War II site retains two paved runways and is set to be used as a base for people wanting to store their planes as well as a hub for those wanting to fly into the region. Other plans for the site include opening a training school for fixed-wing and helicopter training, catering for private and commercial pilots.

Mr Makin said: “I’m passionate about aviation and ready to return this historic site to its full operational glory. This airfield has unlimited potential for growth and suited developments, from commercial storage to business aviation.”

The historic airfield came onto the market after the RAF ceased operations in 2013 and units such as the Yorkshire University Air Squadron were relocated to other bases in the region.

Church Fenton was the home of the RAF Eagle Squadron of American Volunteers during WWII and provided fighter cover for cities across the north of England.

Makins were advised by both Carter Jonas & Addleshaw Goddard in successfully concluding the transaction.  Lambert Smith Hampton & Veale Wasbrough Vizards advised the DIO on the sale. 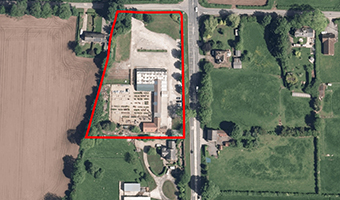 Rare commercial development opportunity offered for sale News The former Cascades Garden Centre on the outskirts of Harrogate has gone on the marke...

Leeds out-of-town market sees highest take-up in five years News The Leeds office market continued its strong performance on the back of a record-brea...

Buyer sought for 200 year old country house in Leeds News Acting on behalf of owners Getech Group and Overland, we have been instructed to sell...
View all content