LSH's Nick Carvey reviews the recent clamour for retail warehousing among industrial investors, and how buying into the sector now may reap long-term rewards.

The opportunity-driven movement of investors into retail warehousing has escalated from the odd example to a clear trend. Yet, while attention has focused on their potential for last mile distribution use, repurposing will be gradual and more nuanced.

Long before the pandemic hit, seismic change in UK shopping habits, fuelled by the rise of ecommerce, was already wreaking damage across the retail occupier markets. The pandemic has compounded this, fast-forwarding structural change that was already in train.

The trauma is reflected in performance, with falling rents and softening yields throwing investors into full scale retreat. However, within the retail arena, retail warehousing is being viewed in a more positive light. This is partly down to the relative convenience it offers, but what really stands them apart is their alternative use potential.

While investment demand is extremely thin for retail property, least of all shopping centres, retail warehouses have led the opportunity play in the sector. Two key factors have helped to fuel this movement; the relative value retail warehouses offer compared with competing uses, namely industrial, and, more recently, major reform to the Use Class Order in the UK planning system.

This movement is clear to see in investment volumes. While investment into retail warehousing sank to a record low in 2020, its share of investment within retail as a whole actually climbed to 40%, having typically accounted for around 25% of retail investment historically.

Tritax’s Metrobox vehicle, a joint venture with Delancey, was arguably the first to enter this space, purchasing £291m of retail warehouse assets over the past two years, while M7 has been the most prolific, investing £338m across 14 assets over the period. Other notable buyers include Argo Real Estate, ProLogis, Federated Hermes and even Amazon, the latter buying Pentavia Retail Park, NW7, London - a vacant site previously earmarked for residential - for redevelopment to last mile fulfilment in Q2 2020.

Big change is a way off

Despite the purchasing activity, it remains to be seen how much of this will ultimately be converted. To date, plans to repurpose retail parks to different uses remain confined to the drawing board, save for the occasional standalone unit, such as Nuveen’s lease of a former Toys R Us unit in Croydon to Amazon in 2020.

The main barrier to change of use is that rental values for retail warehousing continue to sit significantly ahead of industrial, despite falls in the former and rapid growth in the latter. Add to this the costs of redevelopment and the logistical difficulties of vacating a multi-tenanted site, it is little wonder that enacting physical change has lagged investment considerably.

Above all, the value proposition has been the largest pull towards the sector. The tenant covenants associated with retail warehouse occupiers will often already be familiar to industrial landlords, yet the yield spread between an industrial and a retail warehouse asset with the exact same covenant maybe as much as 200 basis points in the current market.

While retail warehousing retains a notable rental premium over industrial, rapid yield compression in the latter has fuelled a convergence of capital values. By way of example, according to MSCI data, top quartile (i.e. 25% of lowest yielding) industrial capital values in the East region have surpassed values for the lowest quartile (i.e. 25% highest yielding) retail warehousing (see chart). The same is true of London, the South East and the South West, while other regions look set to follow suit over the next 12 months.

In some respects, the rise in investment activity can be better thought of as land-banking, something that industrial investors tend to be familiar with historically. With space for industrial uses increasingly scarce in and around the UK’s large urban centres - particularly in London and the South East - strong and growing demand for last mile use is a reassuring ‘fall back’ option for retail parks in the future, if and when they run into trouble. 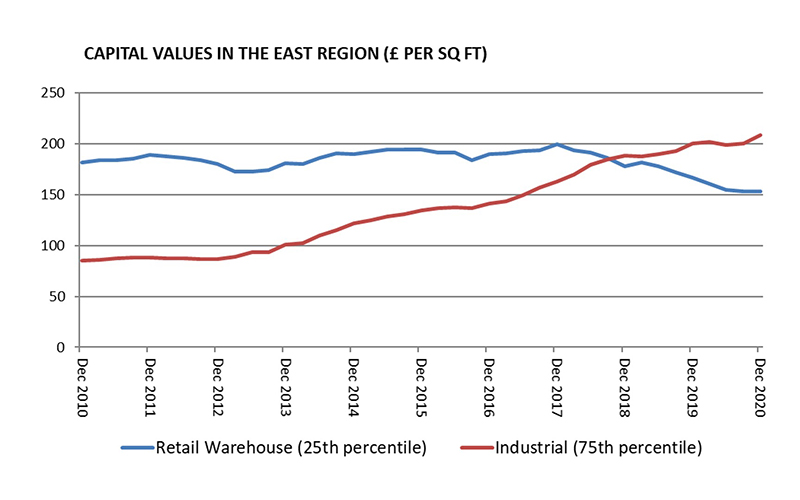 Change of the subtle variety

For the above reasons, talk of a wave of conversions from retail parks to last mile industrial use oversimplifies what might be expected in future. Due to a host of factors, ranging from micro-location, catchment demography and the extent of the site, there is no one-size fits all approach governing how change will manifest itself.

In many cases, retail parks will remain just so, with changes largely involving considered asset management strategies to improve the amenity, quality and type of the retail offer on the site. While rental levels may be rebased and new tenants have to be found, they will continue to have a viable future.

A more nuanced approach is a hybrid model that fuses retail and the distributive potential of the sites. The very essence of Metrobox, which consists of best in class retail warehouse assets, is to drive the untapped potential to maximise supply chain efficiencies for its tenants.  Supermarkets have long since used their stores to fulfil ecommerce demand, and there is arguably huge potential to consider the role of retail parks as inventory hubs; catering for shopping visits, click and collect, product returns and pick-up points for parcel delivery all at once.

Even if the potential for wholesale change of use to last mile has been at times overstated, retail warehousing sites offer perhaps some of the best opportunities to bring about urban change over the next decade. A likely outcome for many retail warehousing sites in the long-term will be a mix of uses and, crucially, higher density development.  For many retail parks, there is room to add additional floorspace, primarily by scaling back on the generous amounts of parking provision currently provided.

This transitioning is already supported by major reforms to the UK planning system, specifically a newly expanded use class E, which now allow for a much more fluid deployment of commercial uses. Furthermore, the government is currently consulting on extending Permitted Development Rights to allow change of use from the new commercial use class to residential.

10 to 15 years from now, it is conceivable that former retail parks are not merely transitioned to last mile use but are in fact new mixed-use developments, combining residential, retail and small scale distribution operations all on the same site. Investors that are buying into the sector now - while the going is tough for retailers and the yields are attractive – may reap the rewards in the long-term.

Download a copy of our Industrial & Logistics Market Report 2021.

Future proofing the workplace Viewpoint The Northern Powerhouse is at the forefront of the UK’s transformation as a digital l...
View all content