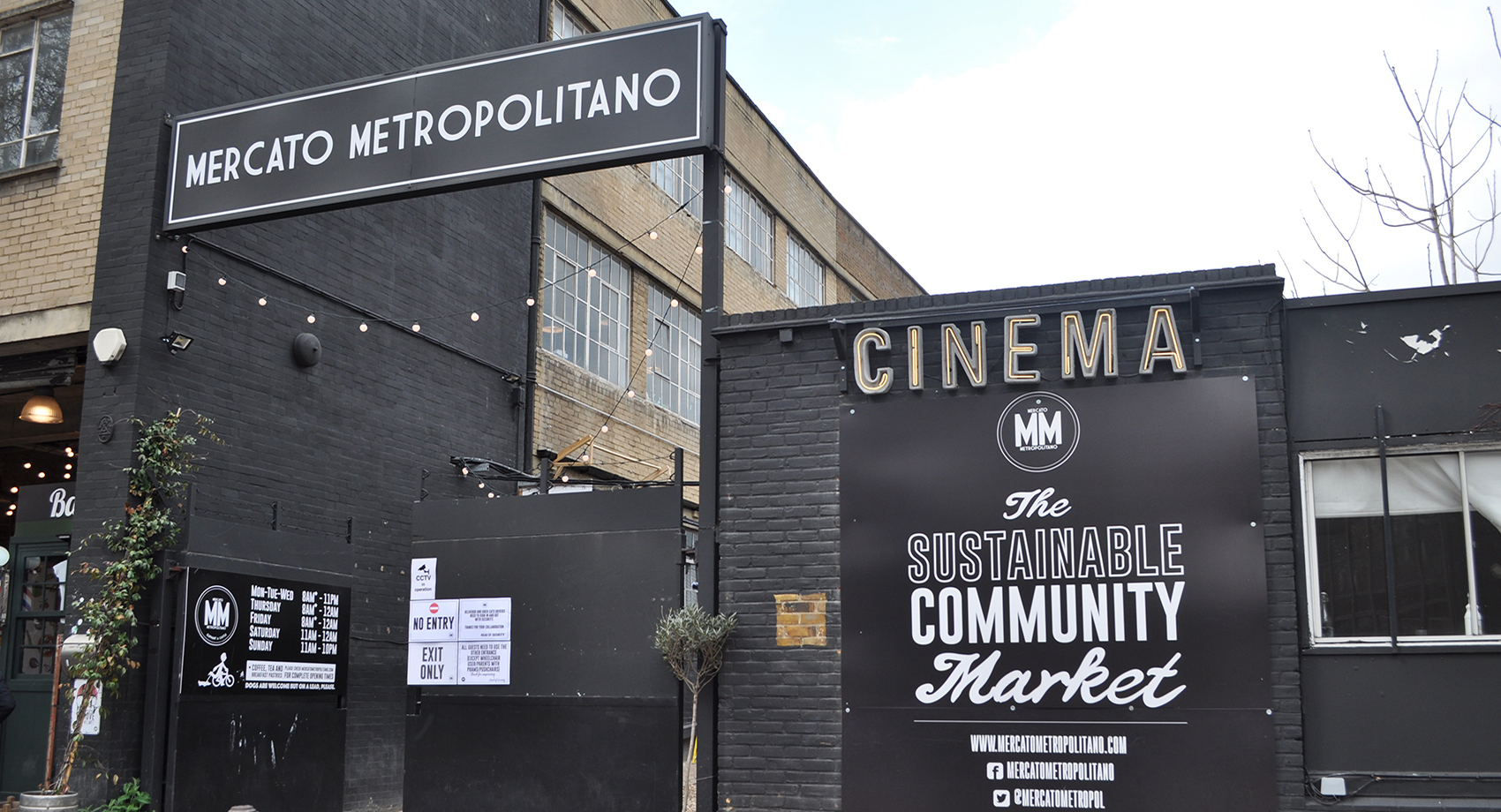 In the meantime: London's meanwhile use sector

London’s meanwhile use sector is not only bringing life to a growing variety of unused spaces across the capital, but it is also playing an essential role in regeneration projects.

The concept of meanwhile use has gained considerable traction in recent years. The term describes any activity that occupies otherwise empty space during an interim period before a site has a more permanent use. In London, this currently includes a diverse range of activities including shops, bars and restaurants, art studios and galleries, gardens, housing and workspaces. Meanwhile spaces can have community or charitable uses, or they can be fully-fledged commercial operations.

Meanwhile use is always temporary, but it is not necessarily short-term. Meanwhile projects can be in place for many years, particularly when they occupy sites that are part of long-term redevelopment and regeneration plans.

The growing profile of the meanwhile use sector was recently highlighted by the publication of a report by the Centre for London think tank. The report identified 51 active meanwhile sites in London with a combined floorspace of more than 2 million sq ft. However, there are undoubtedly additional projects not counted in this figure that could reasonably be considered to have meanwhile use.

Guardians of the property

The biggest single meanwhile use by floor area in the capital is property guardianship. There are currently estimated to be approximately 7,000 people living as property guardians in the UK, with the lion’s share being in London. Guardians enter into licence agreements to live in empty buildings for a relatively low cost and, in return, they help to secure the property for landlords by acting as a deterrent to potential squatters and vandals.

Property guardianship has been subject to some negative publicity. The licence agreements signed by guardians provide more limited legal protection than normal lease agreements, and standards of accommodation and maintenance vary widely.

However, with the sector growing and coming under greater scrutiny, seven of the leading operators have formed the Property Guardian Providers’ Association in order to improve standards and promote best practice. A well-regulated property guardianship sector does have a role to play in making use of London’s empty buildings and providing accommodation to those who would struggle to afford more conventional housing.

Outside of property guardianship, a large volume of London’s meanwhile use space is in properties owned by local authorities and developers. Many of these are sites with development plans in place, but where construction is not planned to commence for some time.

For the owners of such a site, there can be many advantages in opening it up to meanwhile use. Aside from generating income from a property that would otherwise be standing empty, meanwhile use can help to establish a location’s future character ahead of its redevelopment. It can generate footfall, create a buzz, and act as ‘soft marketing’ for future plans. All of this can be particularly beneficial when aiming to create new cultural destinations. Space given to community uses can also help to win hearts and minds in advance of regeneration projects.

Meanwhile use may also provide landlords with opportunities to test out different uses for a site while they decide on their longer-term plans. In doing this, they may be able to gauge a location’s attractiveness to different types of occupiers and consumers, and assess the quality of local transport links.

An element of meanwhile use is now arguably an essential part of major regeneration projects. Examples of diverse projects located on sites covered by large-scale masterplans within London include The Printworks event space in Canada Water; Skip Garden, a community garden in King’s Cross; and Greenwich Peninsula Driving Range.

A means to an end

Meanwhile use space is generally made available at relatively low rents. In some cases, space may be available rent-free, particularly when it is intended for community or charitable use. By its very nature, meanwhile use space is ad-hoc and improvised. Several London projects accommodate occupiers in repurposed shipping containers. However, for small local businesses, this might be the only realistic way of renting a physical space in parts of London where conventional office or retail space would be unaffordable. The meanwhile use sector can thus have a vital role in supporting local enterprises in their early stages, as well as providing space for community projects that would otherwise struggle to find a home. 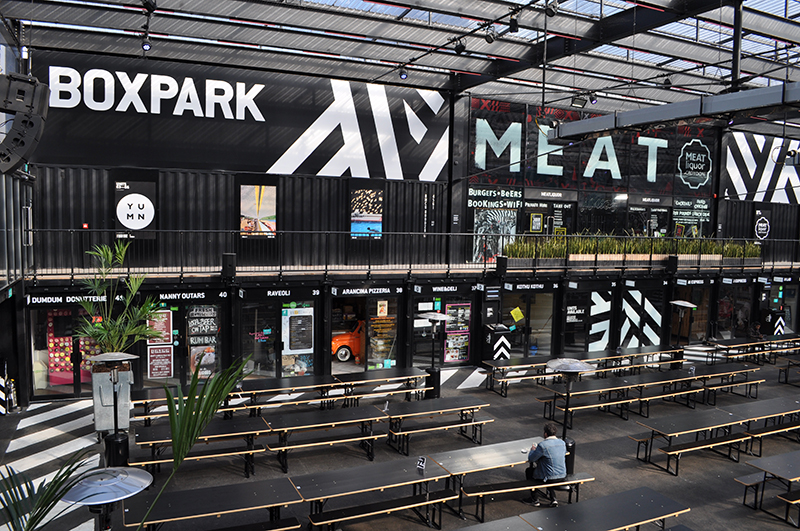 Boxpark is arguably London’s most high profile example of meanwhile use, with sites in Shoreditch, Croydon and Wembley. All three are constructed from reused shipping containers.

Boxpark Shoreditch opened in 2011, and claims to be the world’s first pop-up shopping mall. The site is currently home to 29 shops and 19 food and drink outlets. It is located on part of the former Bishopsgate Goods Yard, a site owned by Hammerson and Ballymore, whose future is still under consultation.

Croydon’s Boxpark was opened in 2016, with a focus purely on food and drink operations. It is around double the size of the Shoreditch Boxpark and includes an event space capable of hosting over 2,000 people. The site is situated on Stanhope and Schroders’ Ruskin Square development, on a plot earmarked for an eventual office development.

Boxpark Wembley opened in late 2018 in Quintain’s Wembley Park regeneration area, under a 10-year joint venture agreement. It is the biggest Boxpark yet, with a 20,000 sq ft event space alongside 27 food and drink outlets.

Boxpark is atypical of the wider meanwhile use sector, being a substantial commercial operation with ambitious national and global expansion plans. It has announced that it will open ten new sites over the next five years, as part of a plan that will see it launch two new concepts; the BoxOffice co-working space and the BoxHall food hall concept.

PLACE / Ladywell is a temporary housing and community space funded by Lewisham Council. It was opened in 2016 and makes use of the site of the former Ladywell Leisure Centre, while long-term plans for this location are put in place.

The upper floors provide temporary housing for registered homeless families, while the ground floor offers retail, office and co-working space for local start-ups and creatives, alongside a community cafe and event space.

The building is a deployable structure, which is planned to be relocated after five years on its current site. It is designed to be re-deployed up to five times over a lifetime of 60 years. 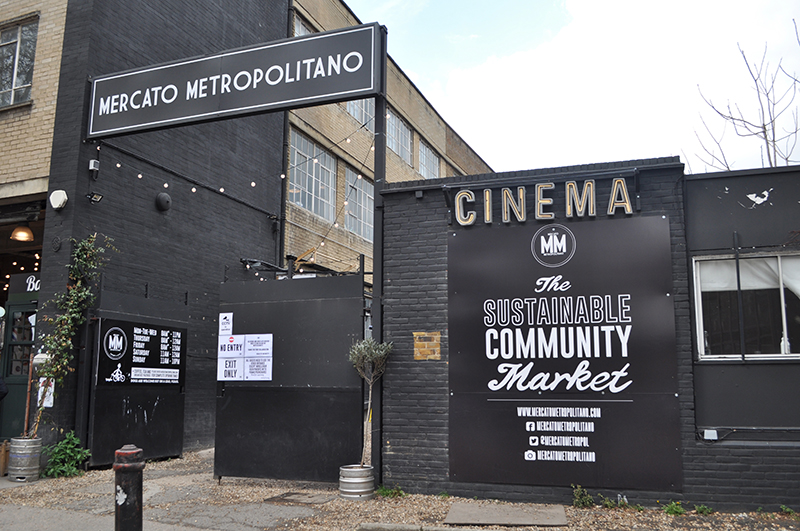 Mercato Metropolitano is a 45,000 sq ft food market located between Borough and Elephant and Castle. Described as a sustainable community market, it is home to local and artisan food producers across four floors.

The market is housed in a former paper factory on the Peabody Trust’s Borough Triangle site. The Peabody Trust has proposals to eventually build 600-700 new homes on the site.

Mercato Metropolitano was founded by Italian businessman Andrea Rasca, and it replicates previous similar ventures in Milan and Turin. A second London site has been announced to be opened at the former St Mark’s church in North Mayfair. 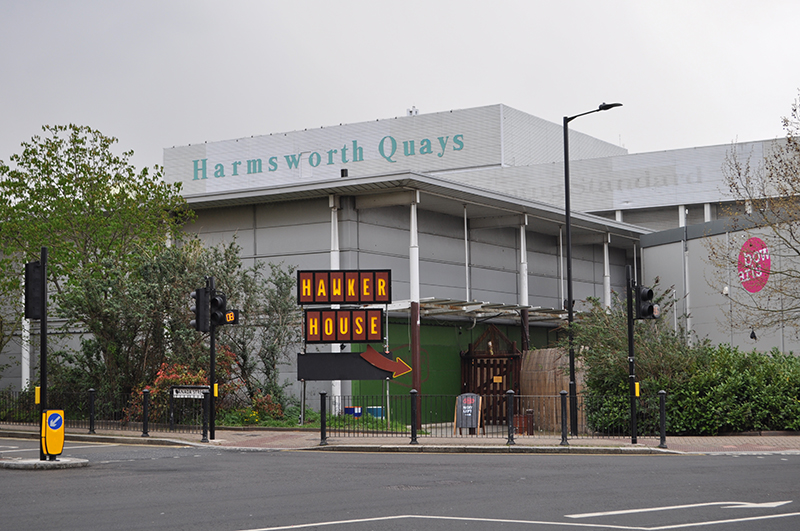 The Printworks is currently available as an event space, offering 119,200 sq ft in six spaces. It has hosted a wide range of events including live and electronic music performances, conferences, exhibitions and product launches. The building has also been used as a filming location by movies such as Avengers: Age of Ultron.

The meanwhile use period is helping British Land to formulate the site’s role in its longer term plans for Canada Water. Its popularity as a music venue is both establishing Canada Water as a cultural destination and increasing the likelihood that the site will have a permanent cultural use. 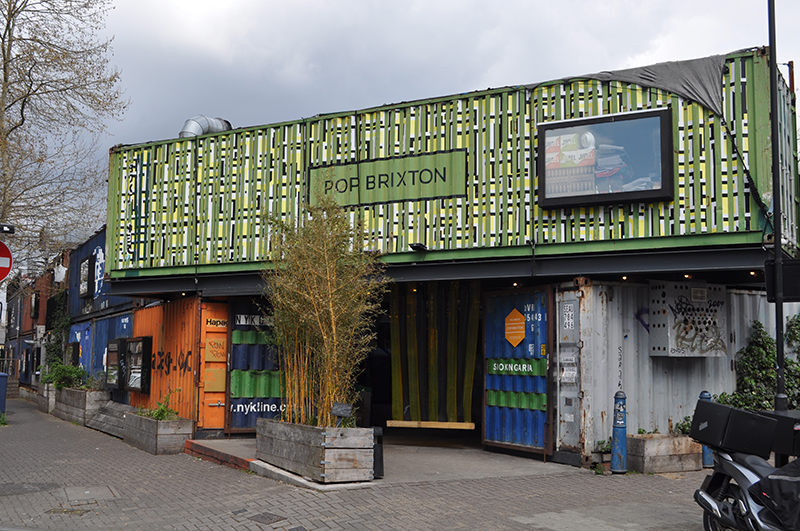 Pop Brixton is a temporary project in repurposed shipping containers on a brownfield site near Brixton station. It provides space for over 50 local independent businesses, including food and drink operators, retailers, creative start-ups and social enterprises.

The project has been delivered by a partnership between Lambeth Council and Make Shift, a company that specialises in repurposing underused urban spaces. Make Shift’s other ventures include Peckham Levels, in a disused multistorey car park, and Clarnico Quay, a proposal for a site on the Queen Elizabeth Olympic Park in Stratford.

Pop Brixton is expected to be in place until 2020. Future development proposals for the site will be included in a Supplementary Planning Document for Central Brixton, which is due to be developed and consulted on in 2019. 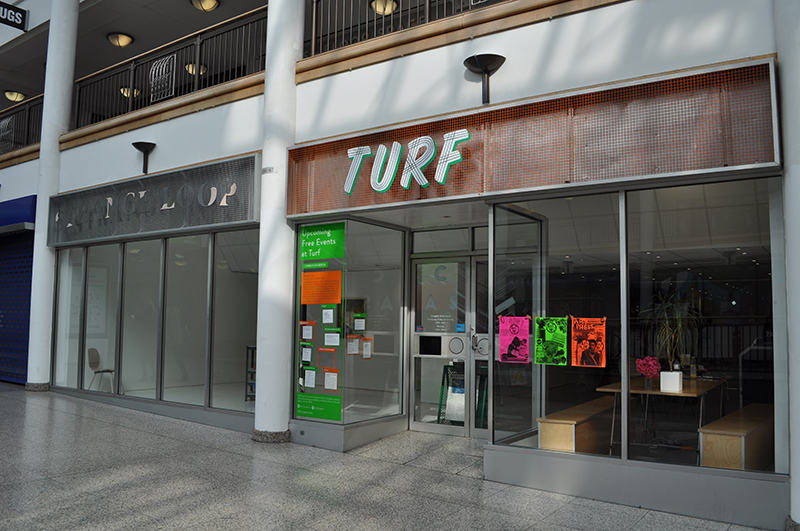 Croydon Arts Store is a temporary arts space on the site of a former furniture store in the Whitgift Shopping Centre. The project is a collaboration between Croydon Council, Kingston School of Art, and local arts organisations Turf Projects and Art Halo.

The space has hosted exhibitions, events, workshops and performances, with a focus on youth engagement and learning. It is also intended as a research space that will test the role of arts and culture in a shopping centre.

The space will eventually be demolished to make way for the redevelopment of the Whitgift Centre into the new Westfield Croydon. 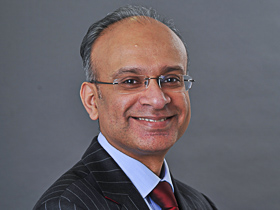