While the delayed 2023 business rates revaluation should provide retailers with much-needed reductions in business rates, this is likely to be at the expense of occupiers in the industrial and logistics sector.

While the delayed 2023 business rates revaluation should provide retailers with much-needed reductions in business rates, this is likely to be at the expense of occupiers in the industrial and logistics sector. Paul Nash, Head of London Rating at Lambert Smith Hampton, explains why.

A LEAGUE OF ITS OWN

It is well-documented that industrial has significantly outperformed other sectors in recent years, largely fuelled by structural change in retailing. According to MSCI, rental values for UK retail property have fallen 15% over the valuation period between April 2015 and April 2021, while UK industrial property has experienced growth of over 25%. With the relative movement between the two sectors over the six-year period amounting to over 40%, this implies that the business rates burden is likely to shift significantly away from retailers and onto industrial occupiers. 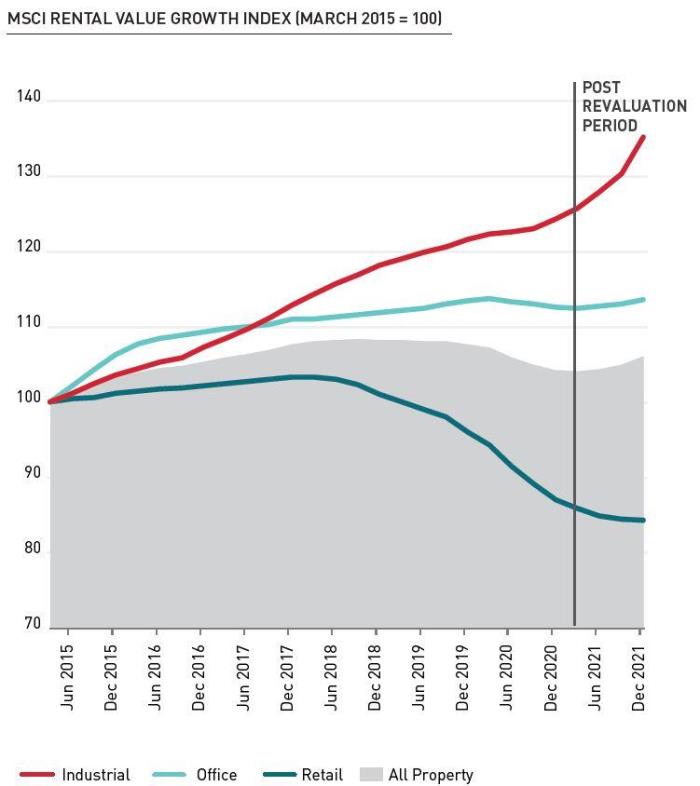 OTHER SECTORS TO BE SPARED

Although MSCI shows the office sector has experienced a 10% increase in average UK rents, the lack of demand for offices as at 1 April 2021, and the relative paucity of rental evidence due to the pandemic, could well result in the VOA in taking a more cautious approach in valuing office properties. This cannot be said for the industrial and logistics market, where tight supply and record levels of take-up have driven strong rental growth, while also providing the VOA with an abundance of transactional rental evidence on which to base its valuations.

Other sectors, such as leisure and hospitality, which are valued for business rates based on trading performance, could also see rateable values fall as result of the April 2023 revaluation. As at the valuation date of 1 April 2021, many of these properties were unable to trade and, while the VOA are highly unlikely to value these properties at a nil or nominal value, these sectors will likely see an overall fall in rateable value.

Thus, the boom in logistics means the industrial sector is likely to experience the greatest increase in value relative to other sectors as a result of the revaluation. While this has direct implications for occupiers, who are already grappling with unprecedented rates of rental growth over the past 12 months, the revaluation will also be of great interest to landlords.

Analysis of past trends suggests that changing business liabilities do not typically interfere directly with the path of rental growth. However, given the sheer pace of rental growth in many of UK’s industrial markets, landlords should at least be mindful of the possible impacts of the revaluation on occupiers’ bottom lines and their ability to pay ever higher rents in 12 to 24 months’ time.

Levels of industrial rental growth have of course not been uniform, varying significantly across the UK. Lambert Smith Hampton’s own data suggests there has been significantly higher levels of rental growth between April 2015 and April 2021 for some industrial properties around the country, particularly in and around Greater London.

In many locations, rents have increased by over 50% over the six-year valuation period to April 2021, which could result in some eye watering increases in rates next year. Furthermore, our research suggests rental growth accelerated rapidly after April 2021, which could cause serious issues for some occupiers with both rents and rates combined increasing to levels which are hard to stomach.

If this were not enough to set alarm bells ringing, the Government’s intention to consider an Online Sales Tax to help fund a reduction in business rates for retailers could add yet more pain to certain parts of the industrial market if such a tax is implemented.

HOW CAN WE HELP?

Lambert Smith Hampton’s business rates experts are located throughout the UK and have access to unrivalled market knowledge through our national network of offices. Access to this market data coupled with our business rates expertise means we are ideally placed to provide advice to both occupiers and owners of industrial properties on the likely impact of the 2023 rating revaluation and potential ways to mitigate increases from 1 April next year.