Key findings from this year's survey.

Across the 54 surveyed locations, the average cost of occupying a new build office in the UK increased by 3.4% over the 12 months to April 2019, accelerating from 2.6% growth in the previous year and running at double the rate of CPI inflation, at 1.8% over the period. The average cost increase was higher still for 20-year old buildings, at 4.3%.

In contrast with previous years, upward movements in headline rents and landlord incentive packages were not the main driver of cost increases. Of the 22 separate cost metrics, the sharpest increases were seen for fit-out, furniture and catering, rising between 6% and 8% over the past year. Meanwhile, other, more day-to-day running costs either broadly tracked or marginally exceeded inflation.

Notably, rental growth played a more significant role in driving the average cost increase for 20-year old buildings. Of the 54 locations, net effective rents increased by 3.3% on average over the year, compared with an average increase of 1.9% for new buildings. This contrasting pattern largely reflects tightening supply of good quality secondhand space across the markets. 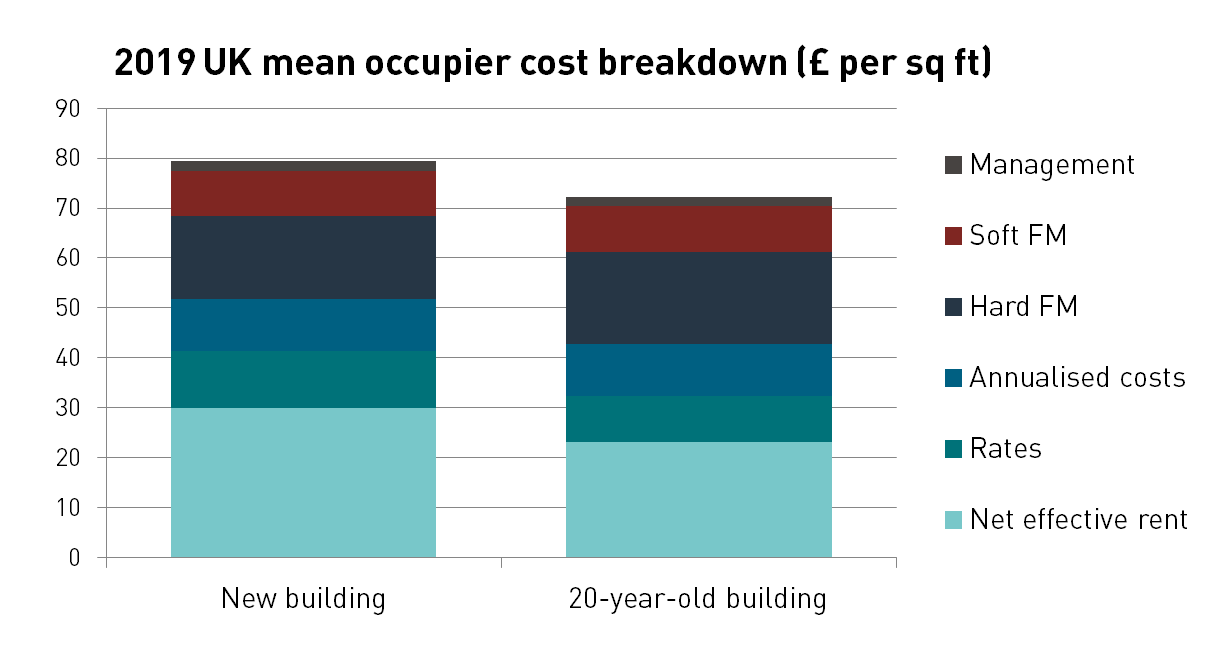 With regard to new buildings, the average rate of cost increase over the 12 months to April 2019 masked a wide range of movements between locations. Of the 54 surveyed locations, four saw growth in excess of 10% over the past year. Exeter saw the sharpest increase, with occupier costs rising by 10.6%, closely followed by Liverpool (10.5%), Milton Keynes (10.3%) and Warrington (10.3%).

In all of the above cases, step changes in rents were at the root of the increases. In Exeter, an absence of existing new build stock meant its rental increase was based on market sentiment, while the sharp rises observed in Milton Keynes and Liverpool were evidenced by transactional activity in their respective markets.

Meanwhile, of the 54 locations, Bristol saw the strongest growth in occupier costs for a 20-year old building, rising by 12.8% over the year to April. Supply of grade A space is extremely scarce in the city, which is in turn putting significant upward pressure on rental levels of older, secondary buildings. 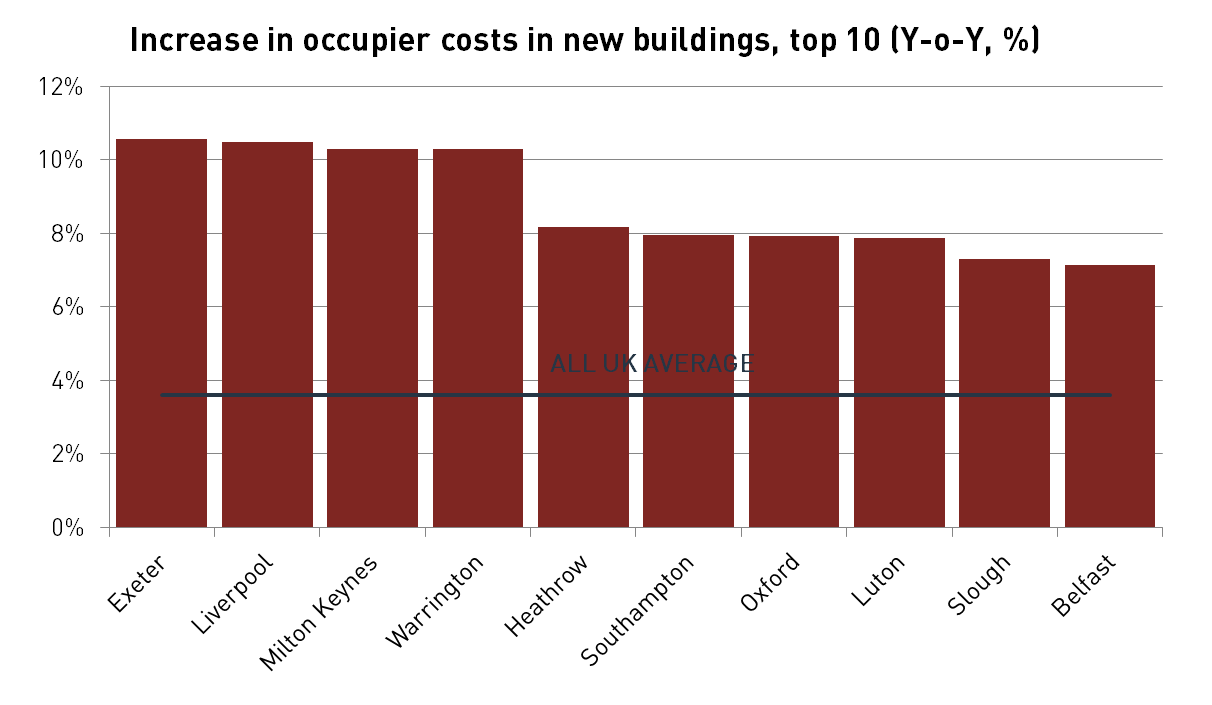 The prime core of London’s West End remains by far the most expensive UK office location, with the annual cost for a new office in Mayfair standing at £18,988 per workstation, 139% above the UK average and 45% ahead of next most expensive location, the City of London.

That said, for a third successive year, the latest survey reveals the gap in costs between the UK’s principal regional cities and London has narrowed from an all-time high in 2016. This reflects the continuation of rental growth in the major regional cities, alongside relatively stable rents in the capital.

The average cost of a typical workstation across the ‘big six’ cities - comprising Birmingham, Leeds, Bristol, Manchester, Edinburgh and Glasgow - stands 38% below London’s Midtown district, narrowing from a peak of 44% in 2016’ survey. Nonetheless, the cost appeal of the regional cities over central London remains strong; prior to the global financial crisis in 2008, the discount was only 25%.

Meanwhile, this year’s updated survey also reveals that Cambridge has overtaken Maidenhead as the UK’s most expensive location outside London. The renowned university city has seen several successive years of strong rental growth, with annual costs amounting to £9,350 per workstation. 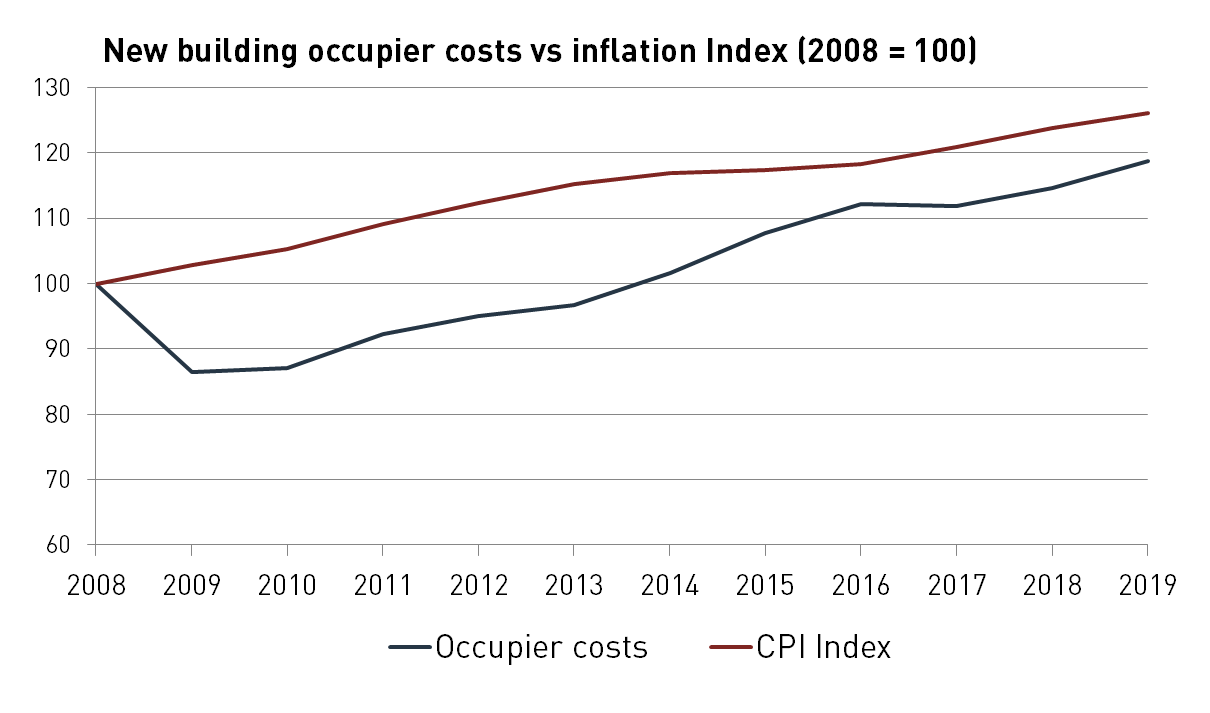 Taking a longer-term view, the movement in average occupier costs has not kept pace with inflation over the past decade, meaning costs have actually fallen in real terms. Since 2008, average prices have increased by 26% through inflation, whilst average occupier costs for new buildings have increased by only 19%. Evidently, the immediate effects of the global financial crisis in 2008 continue to leave a mark.

Of the 54 locations, only ten have seen occupier costs rise above inflation over the past decade, all of which are found within London and surrounding regions. Moreover, only three markets have shown substantial real terms increases in costs since 2008, namely Cambridge (up 49%), Hammersmith (up 44%) and Richmond (up 43%).

Explore costs in your area

View full office occupancy costs across the UK and assess how these differ by location and sector across new and 20-year-old buildings on a per sq ft and employee basis. 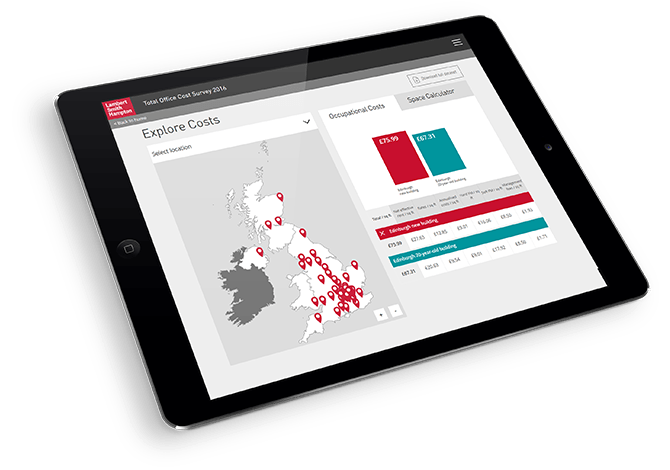 If you would like to speak to one of our team about TOCS please fill
out the form below or contact Oliver du Sautoy, Lambert Smith Hampton's Head of Research.