Activity in the regions was key to Q3’s improvement in volume, while London and portfolios continued to struggle. 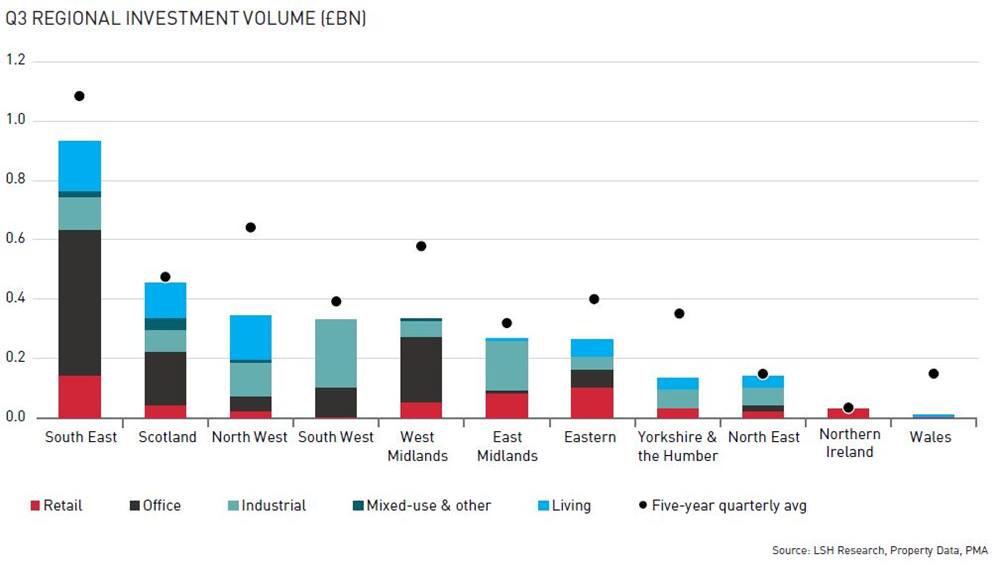 While London was home to many of Q3’s big ticket deals, activity in the capital remained subdued at 60% below trend. This reflected another barren quarter for Central London offices, where volume was below £1bn for a second consecutive quarter, despite the £380m boost from the sale of 25 Cabot Square.

Notably, living volume across the capital rebounded to £814m in Q3, the vast majority accounted for by BtR/PRS schemes. In addition to the aforementioned deals in Lewisham and Croydon, Long Harbour forward funded a £156m 315-unit BtR scheme in Tottenham Hale, their second BtR investment on this site.

In sharp contrast with London, activity elsewhere in the UK ran closer to pre-COVID trends. Single-asset volume across the regions collectively totalled £3.2bn in Q3, only 28% below the five-year quarterly average. With the exception of Yorkshire & the Humber, all regions also saw an uptick in volumes in Q3.

Scotland and the North East performed best, with Q3 volume only 4% and 6% below trend respectively. L&G was key to volume in both regions, with the forward funding of an £82m BtR scheme at Candleriggs Square, Glasgow; and the acquisition of a £60m manufacturing hub at Hillthorn Park, Washington.

Portfolio volume rebounded by 56% on Q2’s near record low to £1.0bn but was nonetheless 67% below the five-year quarterly average. Approximately a third of this was also accounted for by Columbia Threadneedle’s £370m purchase of the MAGIAL portfolio from the Manchester Airport Group.